In hardcover and softcover at Amazon.com and through major bookstores

The New York Irish is the history of a three hundred year relationship between America’s premiere city and one of its oldest ethnic groups.

The volume is edited by Ronald H. Bayor, professor of history at the Georgia Institute of Technology, and Timothy J. Meagher, archivist and museum director at the Catholic University of America.

From the Dutch and British colonial periods, through the Revolutionary era and the early days of the Republic, a steadily growing number of Irish immigrants and their descendants formed a distinctive element of the city’s population. A flood of new arrivals during the 1840s and 1850s swelled their numbers, and by the close of the Civil War more than a third of all New Yorkers were of Irish origin. During the closing decades of the nineteenth and the first years of the twentieth century, they dominated the politics and shaped the cultural, social, and economic life of the metropolis. At the same time, a distinct ethnic subculture developed that has been sustained by three surges in Irish emigration to New York during the 1920s, 1950s and 1980s. Despite several generations of assimilation and dispersal, the Irish still play an ongoing role in the New York experience, and serve as a model of adaptation in which ethnicity both survives in, and is transformed by, the urban environment.

Five essays provide a concise chronological overview of the interaction between New York and the Irish from the colonial period to the present. Twenty essays fill major gaps in the historiography of the Irish in America, including discussions on religious diversity; entrepreneurship in business; the homefront during the Civil War; the importance of place of origin on ethnic social life; efforts to foster the Irish language; how music was an arbiter of social change and ethnic transmission; the impact of labor and nationalist movements on local politics; and the social implications of geographic mobility. The New York Irish also offers new insights into urban and social history, including relations with African Americans, Chinese and Dominicans; the medicalization of anti-immigrant prejudice; the constitutionality of freedom of religious expression; the appeal of popular Catholicism; the onus of illegality; and ethnicity as liberating doubleness.

The New York Irish contains over thirty illustrations, including eight new maps, and statistical tables. Its large, annotated bibliography has been published separately as The Irish Experience in New York City. (See following)

Excerpts from The New York Irish

It is the complicated story of a people who have fought to push out the boundaries of American nationality to encompass their ethnic and religious beliefs and in so doing sometimes helped to reinforce the boundaries of race that kept African and Asian Americans from full participation in the city’s or the nation’s life. Throughout their history in New York, the Irish have been at the border of the ins and outs, interpreting one to the other, mediating, sometimes including, sometimes excluding. They have been both victim and victimizer, “other” and definer of the “other,” and, paradoxically, sometimes played both roles simultaneously.

The early American republic’s first constitutional victory for free religious exercise did not flow from cold textual analysis but was a gut response to an appalling and skillful United Irish rhetorical portrait of ethnic persecution against the native Irish. In its inception, its argumentation, and its resolution, the first free exercise case turned on the religion, ethnicity, and history of New York City’s early Irish immigrants. It offers important clues to the cultural construction of law.

Irishmen were also portrayed as short and stocky, the very physique that pseudoscientists associated with people who were not very active, but somewhat “slothful” or “lazy.” Many Irishmen were depicted as having coarse red hair, precisely the kind thought to indicate an “excitable,” “sociable,” or “gushing” personal manner. If the Irish were ruddy-complexioned, this was seen as a sign that they were given to raw, unrestrained passions and self-indulgence. Those with dark eyes could be expected to be arduous or excessively sensuous. According to phrenologists in the 1850s, such individuals would not be contented with indoor or sedentary labor but would gravitate toward outdoor occupations because they required “a great amount of air and exercise.” That many of the Irish who arrived at mid-century worked on the docks or the railroads seemed to confirm their “scientific” profile.

There had been a number of calls for an Irish-language journal, and with so many students enrolled in classes the time seemed right. In 1881 Michael Logan started to publish An Gaodhal in Brooklyn. This largely Irish-language journal marked an important advance in the Irish language movement in America. Like the Irish-American, it provided a forum for language enthusiasts, fledgling authors, and collectors of Irish folklore. It also seems to have been a catalyst in moving the newly founded Gaelic Union of Dublin to begin publishing its own periodical, the Gaelic Journal.

If [Mayor John Purroy] Mitchel transformed social welfare reform into a battle with the church and therefore, given the makeup of the hierarchy, into a battle with his fellow Americans, he turned several other anti-Tammany measures, most importantly progressive education, into virtual wars with not just the Irish but also with all the nationality groups in the city.

The sense of seige in the neighborhood was heightened by the cultural conflict between the old-timers and Latino newcomers. The streets became a battleground. The Irish blamed the Dominicans for making them filthy, much as native New Yorkers had blamed the immigrant Irish for fouling the streets in the nineteenth century.

The Irish, one of the first immigrant groups to be analytically studied, and a group that has been in the United States long enough to see the full process of assimilation at work, is also part of the new immigration to America in the 1990s. It is therefore a key group in America’s ethnic mosaic, one that encompassses all the elements needed to understand the differences and similarities between earlier immigrant migration, adjustment, and assimilation and the behaviors of today’s arrivals. Its history also sheds considerable light on such issues as intergroup relations, stereotyping, the development of an Euro-American identity, the impact of new migration on those of the group already settled, neighborhood succession, mobility, and gender roles. Furthermore, the Irish, as a group that challenged the cultural hegemony of the majority of Americans in the nineteenth century, provide a good comparative example through which to understand the friction evident today as the sources of immigration have shifted to non-European countries. 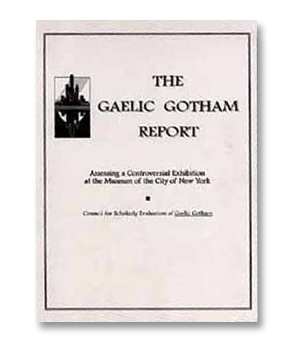 A 177-page report that presents assessments of the exhibition Gaelic Gotham: A History of the Irish in New York which was assembled by the Museum of the City of New York and opened for a seven-month showing at the Museum on March 13, 1996. The report is occasioned by reactions within the New York Irish-American community to actions and statements, relevant to Gaelic Gotham, by Museum administrators that began in 1995 and continued into 1996.

These community-based reactions occurred in a period when various controversies over historical and cultural exhibitions at other institutions, including the Library of Congress and the Smithsonian Institution, were subjects of national attention. The import of these controversies, their similarities and differences, as well as the meanings of community-based reactions and the appropriateness of responses by museum administrators, are central to questions of public participation and institutional responsibility for scholars, museum and civic leaders, and the peoples they serve. The Gaelic Gotham Report contributes to framing and answering these questions.

The immediate purpose of the report is to make considered assessments of Gaelic Gotham available to interested parties.

Its contents include the following:

Letter to The Irish Times regarding “The Gaelic Gotham Report”:

I was a contributor to “The Gaelic Gotham Report,” which was the subject of Joe Carroll’s comments in his “Letter from America” (May 24, 1997). His statements while intended, I suppose, to amuse, lead only to puzzlement.
For example, he suggests that the Report is vague or unclear about what was lacking in the distressing Gaelic Gotham exhibition on the Irish in New York assembled by the Museum of the City of New York last year.

Vague? Unclear? Chapter V alone lists 111 factual errors in the exhibition and details specific areas of interpretive failure. Chapter IV gives all known press reviews of the exhibition published during the first three months of the exhibition,including observations from The Irish Times, The New York Times, and The Wall Street Journal. Were these reviews somehow ambiguous about gaps and failures in the exhibition? And Appendix D includes specific criticisms and resolutions regarding Museum actions articulated by the Council for Scholarly Evaluation of Gaelic Gotham, the academics who contributed to the development of the Report. Was Appendix D missing from Joe Carroll’s copy of The Gaelic Gotham Report?

In addition, Joe Carroll’s statements about Donal Hamill, the Irish Consul in New York City at the time of the pre-exhibition controversy, are puzzling. According to these statements, Mr. Hamill tried to mediate the controversy but was not successful. What is troubling here is that Joe Carroll does not say enough. Why doesn’t he include the fact that Mr. Hamill was not a disinterested mediator but was, unfortunately, dragged into the dispute by Museum officials to patch together for the show the community support previously destroyed by their own Director?

Finally, Joe Carroll cites some of the secondary criticisms of the Gaelic Gotham exhibition made by Drs. Alan Feldman and John Tchen. What is bewildering here is why he fails to say anything about the major points they made about the exhibition in a public seminar at Columbia University and reproduced in the Report, namely that the Museum’s show was characterized by a failure of imagination and interpretive accomplishment largely caused by administrative ineptitude, institutionalized elitism, and questionable morality.

Of course, what is most puzzling in all of this is that Joe Carroll finds the Museum’s treatment of the Irish in New York, and their history, simply a laughing matter.

The Irish Experience in New York City is an extensive research guide to non-archival sources on the history of the Irish in New York. The diversity of subjects represented in this bibliography makes it easier for students of the Irish in New York—an important ethnic group in America’s premiere urban center—to plan their research or to uncover gaps in the literature that still wait for a scholar.

Nearly seven hundred entries include unpublished materials such as Master’s theses and doctoral dissertations, as well as published articles, chapters, books, and videos. A variety of disciplines, such as History, Sociology, Public Law, Economics, Political Science, Journalism, English, and Urban Studies are represented, as are subjects ranging from the Irish in the clothing industry and the military, to neighborhood and parish histories, and personal memoirs. The majority of the entries are annotated. Author and subject indices are included.