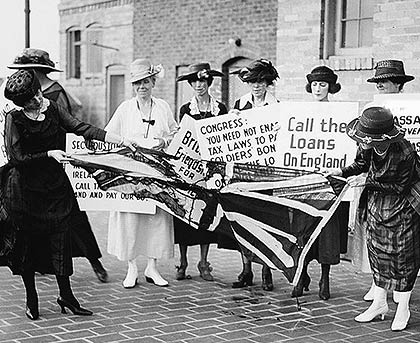 On Saturday, April 13, the New York Irish History Roundtable will present a unique program on “Irish Women of Action,” associated with New York, who devoted much of their lives to major social changes like Irish independence, relief for the impoverished, and achievement of women’s rights. This special panel brings together experts on the topic, and will begin at 2 p.m. in the McCloskey meeting room in the parish house of the Basilica of St. Patrick’s Old Cathedral at 263 Mulberry Street in Manhattan. Members are strongly urged to arrive early because space is limited.

For years Irish New Yorkers supported struggles in Ireland for reform and independence. Historians in the past have described actions taken by the New York Irish, focusing on contributions by men and, to a lesser extent, by women. But recent research into the activities of Irish women in New York has revealed new information about their activities on behalf of change in Ireland…and within the United States. This Roundtable program focuses on four of these Irish Women of Action—Gertrude Kelly, Marguerite Moore, Mary Jane Irwin, and Alice Comiskey.

Dr. Gertrude Kelly was born in Carrick-on-Suir on the Tipperary/Waterford border in 1862. She studied medicine in New York City, graduating in 1884 and opening her medical practice in Manhattan. For most of her life, she remained actively involved in Irish efforts for independence by publishing articles, speaking on issues, and organizing demonstrations and work actions. And she fought for causes supporting assistance to poor women and urban families. She played vital roles in the Ladies’ Land League. In 1914, she founded the American chapter of Cumann na mBan in New York City’s McAlpin Hotel.

Presenter: Miriam Nyhan Grey. Miriam Nyhan Grey is Director of Graduate Studies for the MA in Irish and Irish-American Studies at New York University’s Glucksman Ireland House. She is the editor of Ireland’s Allies: America & the 1916 Easter Uprising, and host of “This Irish American Life” on WNYE 91.5FM, Saturdays 9 a.m.. Her article on Dr. Gertrude Kelly’s founding of the American chapter of Cumann na mBan was published in 2016.

Mary Jane Irwin O’Donovan Rossa was born in Co. Cork in 1845. As a young woman, she joined the Young Ireland Movement and married rebel O’Donovan Rossa in 1864. She wrote for the Fenian newspaper, The Irish People, and collected funds supporting families of incarcerated Fenians. After emigrating to America, she continued writing and speaking on issues of Irish independence. She was a vital part of Clan na Gael and wrote for the Gaelic American. Her final poem was “In Memory of Padraig Pearse.”

Presenter: Williams Rossa Cole. Williams Rossa Cole has been producing and directing documentaries for over 15 years. Early on, he began working on the life of his great-grandfather, the Irish patriot Jeremiah O’Donovan Rossa. The result was his documentary Rebel Rossa, which premiered at the Galway Film Fleadh. Williams Cole is now engaged in a new documentary, this one about his great-grandmother, Mary Jane Irwin, wife of O’Donovan Rossa.

Marguerite Moore was born in Co. Waterford in 1849. At an early age she became a supporter of the Land League and public speaker on behalf of the needs of Irish tenant farmers and assistance for families victimized by eviction. Because of her views and membership in the Ladies Land League, she was imprisoned in Tullamore Jail. Following immigration to America, she campaigned on behalf of Irish nationalism and took up causes associated with women’s rights and the wages and conditions of labor in the United States. Her actions on behalf of Irish independence continued into the 1920s.

Presenter: Elizabeth Lee Hodges. Elizabeth Hodges is a Master’s student in the Irish Studies Department at New York University. She obtained her BA in History from the University of Louisiana at Lafayette and is currently an educator at the Lower East Side Tenement Museum. Elizabeth’s area of study focuses on transnational Irish women’s history, immigrant history in the Lower East Side, as well as women’s activist history.

Alice Carragher Comiskey was born in 1887 in Co. Monaghan, the eleventh of twelve children. She arrived in New York with her widowed mother in 1898. She became active in Irish associations, with her name frequently appearing in the city’s Irish newspapers. She and her sister, Lily, became founding members of the New York chapter of Cumann na mBan, for which she served as treasurer. In 1920 she and her sister agreed to a request to take the aging John Devoy into their home, where he lived until his death in 1928. She remained active on behalf of Ireland for the rest of her life, in organizing the Irish Race Convention in 1947 and running the American League for an Undivided Ireland in the 1950s.

Presenter & Panel Chairperson: Maureen O. Murphy. Maureen Murphy is Professor Emerita at Hofstra University where she has been Professor of Curriculum and Teaching, Director of the Secondary English programs and co-Director of the undergraduate Irish Studies minor. She was the Director of the Great Irish Famine Curriculum Project, is a past president of the American Conference for Irish Studies, and a past chair of the International Association for the Study of Irish Literatures. She has written more than 100 articles and book chapters and delivered more than 300 lectures in eighteen countries.

Members are strongly urged to arrive early. Space is limited.

← A Visit To Mc Sorley’s
The Unstoppable Irish →